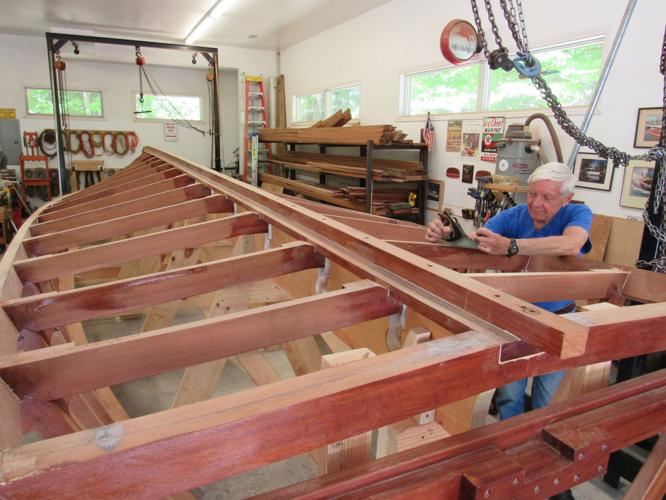 Hidden away in a lakeside workshop in Wirtz,Virginia, Alan Frederick has spent the last year and a half working on his dream project. A unique and massive 35-foot runabout is starting to take shape that he hopes to one day put into Smith Mountain Lake.

Frederick, a member of the Smith Mountain Lake Antique and Classic Boat Society, has rebuilt several old boats over the years and has continued the hobby since moving to the lake 11 years ago. This project, planned for more than 30 years, is to build a boat from scratch that will be unlike anything else before it.

“I wanted something different than everyone else had,” Frederick said.

The inspiration for Frederick’s boat build came to him in 1990 while at a boat show near Buffalo, New York where he used to live. At the show he took a ride in a 38-foot runabout with a pointed “torpedo” stern.

“It was just awesome,” Frederick said of the boat and the long wood boards that covered it.

Since that time, Frederick said he wasn’t actively working on the project, but he slowly began accumulating items to be used for construction. He purchased a large inventory of African mahogany timbers in anticipation for the project one day. He said the wood is popular for boat building since it doesn’t rot.

Frederick made the first steps toward building the boat four years ago when he contacted Syd Young, a well known boat builder and former CEO of StanCraft which has built and designed boats since 1933. Young drafted the blueprint for Frederick based on his ideas. 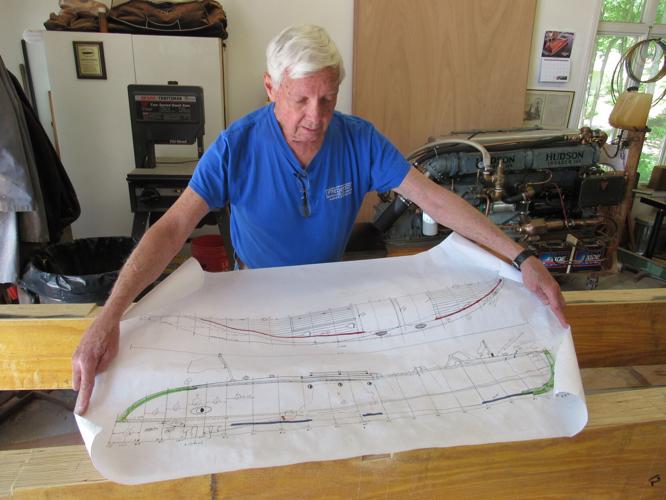 Frederick said the design is totally unique to any other designs by Young. It is also the only boat designed by Young that wasn’t built in the StanCraft facility.

While planning the boat design, Frederick said he visited Young in his shop in Idaho and even helped him briefly on a boat he was working on. The two have stayed in contact, especially as he finally begins to build out Young’s blueprint.

One piece that will not be designed from scratch is the boat’s engine. Frederick had the idea to use a unique engine for his one-of-a-kind boat and purchased an engine built during World War II by the Hall-Scott Motor Car Company.

The 2,350 pound, 6-cylinder gas engine was used in the World War II landing craft. Markings on the side of the engine read “Hudson,” since the company assembled the engines during the war. 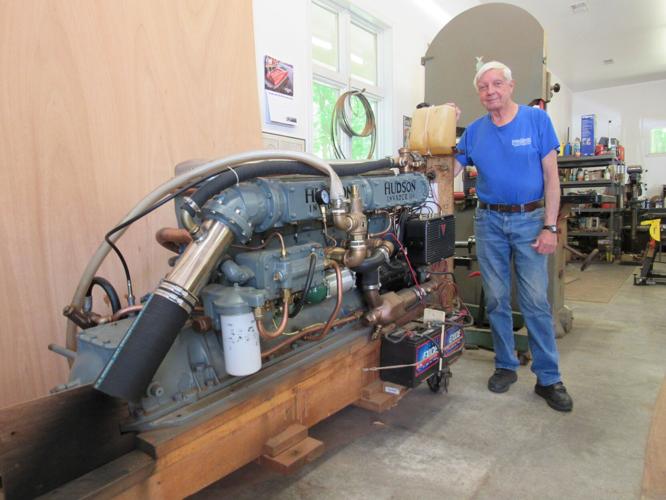 Frederick said the roar of the engine will be unlike anything else on the water. “It sounds like an old aircraft engine,” he said.

Restoring the old engine was difficult, Frederick admitted. It has been hard to find replacement parts for the 80-year-old engine. Luckily, he was able to purchase a second Hall-Scott engine from a museum in Nevada that was going out of business. He said the engine is now in storage if he ever needs it for replacement parts.

Since beginning the build a year and a half ago, work has slowly progressed. Frederick said he spends 15 to 35 hours a week on the project. His main help comes from Franklin County High School Student Olivia Dow who has assisted with the project when her schedule permits.

Much of the frame of the runabout is now in place, but there is still much more to do before it is completed. Frederick expects it to take another three years to finish.

While three years isn’t much time, at 77, Frederick admits his time is limited. He wants to complete this project while he is still healthy and able.

The scope of the project can be daunting at times. Frederick said he is sometimes overwhelmed by the amount of work that still needs to be done. And it can be frustrating when wood won’t behave after he cuts, sands or bends it into shape.

His goal is to unveil the boat at a Smith Mountain Lake Antique Boat Show in three years. He would then like to take it to other boat shows around the country. He said it may be hard to dock the boat anywhere. At 35 feet, it won’t fit in most boat slips.

While the project has been a challenge for Frederick, he is eager to see it through to the end. When the work seems impossible, he makes himself a list of goals for a day or week to check off to help him move toward the eventual goal of having it out on the lake.

“My dad had a saying: ‘The impossible just takes a bit longer,’” Frederick said.

This story was originally published on May 15, 2022 by Lake Media on their website, smithmountainlake.com, and also featured in their weekly newspaper, Laker Weekly.  It is republished here with permission granted by Laker Media.