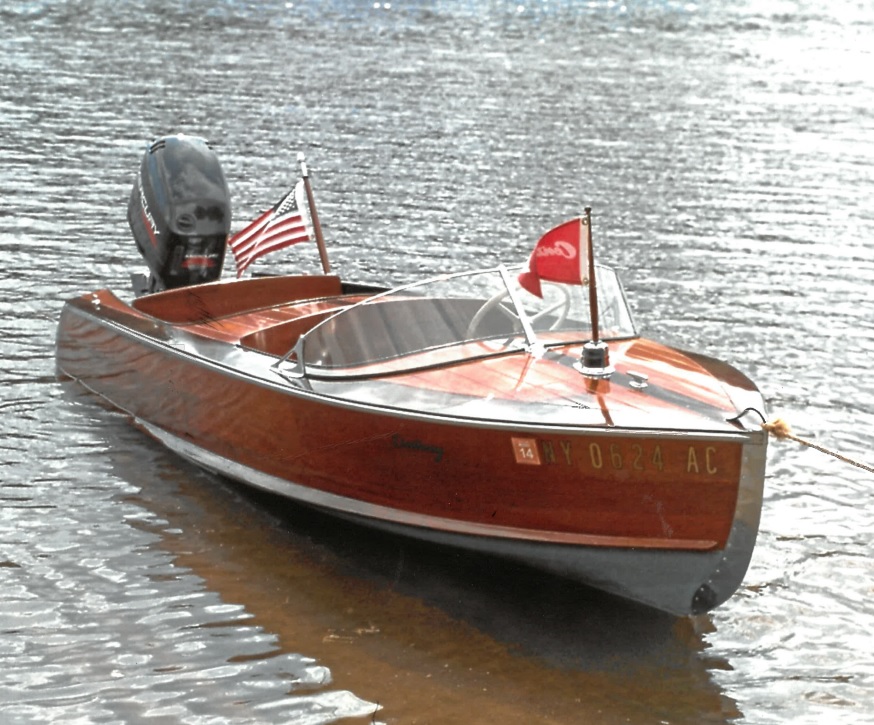 by Roger McCoy member of the Finger Lakes chapter

Spending summer weekends at my uncle’s camp was always the highlight of my summers as I grew up. Water skiing being one of our major pastimes. When my Aunt and Uncle passed away I helped my mother on weekends clean out the camp to sell. For my labors I was able to bring home the Century.

My Uncle bought the Century after getting back from Europe serving in the military. My father nor Uncle ever said much about their service. While watching the military channel one day there was a P49 with LuLu painted on it. When I saw that I knew what to name my boat.

After I brought the boat home and uncovered it I noticed all the deck finish had alligatored from a gas leak. So my first project as owner was to refinish the top. The sides still have the original stain, they just needed a light sand and coat.

When I first got the Century it had a 40hp Johnson, the first time out cruising at full throttle and hitting a wake it flew the motor into neutral! Kicking up out of the water and I thought it was going to rip the transom right off. That night I ordered a Merc 40hp. That Merc makes the boat so much fun. It is as fast as a 750cc Jet Ski, from a dead stop. It is a 3cyl 2 stroke.

After a few years and a few more coats, I decided to go to the Finger Lakes show, they loved the boat and guided me along the way to winning awards. My prize one being the Marque award at the ABM show in 2013. She was even used by our local TV station to promote the Finger Lakes show.

One year on the 4th of July weekend LuLu and I came up to Clayton for the dedication of Kensington. I was the only one there with a boat. During the dedication ceremony they had me park LuLu right in front. After we gave rides to some of the trustees for the Museum.

This summer I had the Grand-kids up to Alex Bay at the International show. They went out with me and they were laughing and screaming with joy. They didn’t want to get out, I had to tell them I was going to run out of gas in the middle of the River. The funny thing was that they were afraid to go in the beginning, once they got out all fears disappeared.