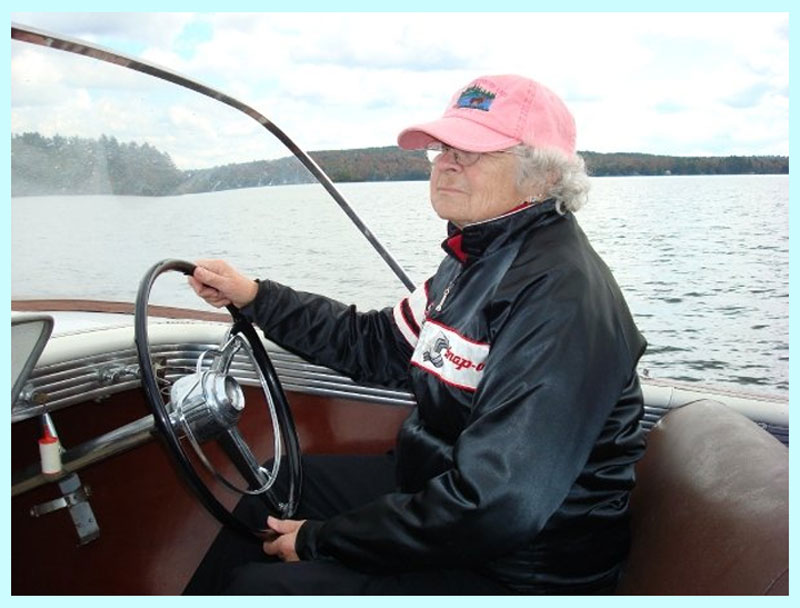 Although the official name of this boat is “Yorktown”, the boat is known to all as “Mom’s Boat”.

In fact, when Troy Hersom registered the 1957 Chris Craft Continental with his ACBS membership, he inadvertently typed the name of the boat as “Mom’s Boat”.  When asked about the boat, this was Troy’s wonderful reply:

I know you have all the details about Yorktown, except the proper name, so I will not bore you with those details except to let you know that she is still running on her original MCL with its 6 volt system.

My parents, Dr. Frank S. (Mike) and Ginny Hersom, purchased Yorktown on June 21st 1965.  Just 16 days after the birth of my younger brother Rory.  I myself was a mere 2 1/2 years old at the time.  To my knowledge Mom and Dad were the second owners and she has spent her entire life on Lake Cobbosseecontee in central Maine.

Growing up Yorktown was simply a part of life, being launched every spring, used all summer, and stored in the garage in the winter.  Every so often Dad would have some work done by Reed-Craft of Winthrop Maine to keep her in great usable condition.  My afore mentioned brother, Rory, and his bride even left their wedding in her.

After Dad’s passing in 1995 Yorktown had a mechanical issue and sat dormant in various storage locations for 12 years.  After 10 years or so of no use Mom thought it might be time to sell her.   I was able to convince her to allow me to see if I could get her running as it would, at the very least, be more valuable as a running usable boat.

On September 8th, 2008 Mom, Rory, Tammy (Rory’s wife), Norma (our older sister), Sam (my daughter), and I re-launched Yorktown into the waters of Lake Cobbosseecontee.  It was a victorious emotional day.

Mom, now 90 years young, still owns and uses Yorktown every summer at the same cottage that she and Dad were living in when they purchased her 52 years ago.  I have been blessed with the privilege of caretaker since 2006. 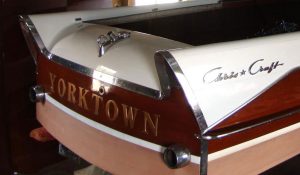 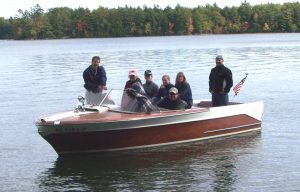 Celebrating the relaunch of Mom’s Boat 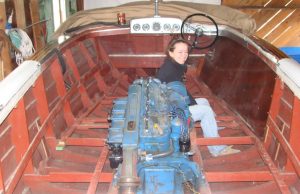 Happy Mother’s Day to the mother of the Hersom Family and to all Moms for creating great family memories, often with vintage boats and boating.