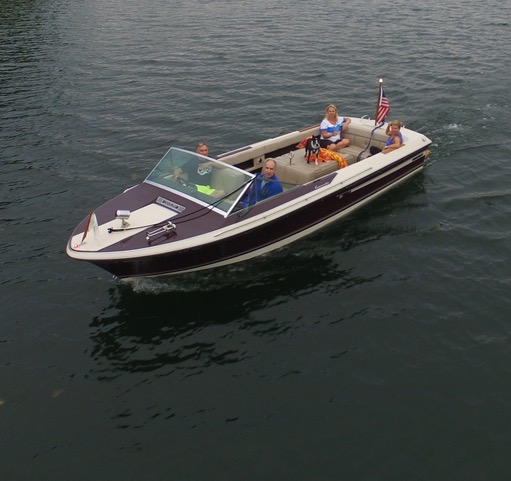 I grew up with the privilege of spending summers on a small lake in Northern Wisconsin. My first boat was given to me for my 9th birthday, a 14-foot aluminum Smoker Craft with a new 1966 9.5 Evinrude. In those days’ parents thought nothing of sending you on your way to adventure on the lake, the only requirement being “wear your lifebelt”. Wave hopping behind Chris-Crafts pleasure riding at half plane was our favorite sport.
As a teen the family had purchased a new 1967 Larson Volero, the first Volero on our lake with the big six-cylinder engine. In the late sixties and early seventies, the replacement cycle of wood Chris-Crafts to plastic runabouts was in full swing. Inboards were passe, inboard outboards were the future. In the span of five years Larson boats became the dominant runabout on our little lake.

I thought our Volero was pretty cool and enjoyed doing the things teens due to explore the “limits” of its performance. However, in the early 70’s one of our neighbors purchased a 17’ Century Resorter. This boat planted a seed in me that never went away. The boat was off white over burgundy. Century runabouts have a regal understated line, and its BMW build quality made our Volero look just plain cheap. I was envious forever.

Fast forward many decades and ownership of several other boats, including a couple of wood Chris-Crafts. The needy nature of my wood boats was getting less “fun” despite my addiction to these beauties (I still love my 48 Red & White Racing Runabout). The Century seed from decades back was germinating in my mind so I decided it was time to take care of that old envy and add a classic glass Century to the fleet. I liked the idea of “classic but easy to care for” and decided that a Century Coronado would be the perfect boat for me.

I enlisted the help of my trusted classic boat guy, Dave Bortner to search for the perfect Century Coronado. I thought it could be years before we found one that met my criteria of original gelcoat, burgundy hull, low hours, and overall pristine condition.

In less than 2 months Dave had located a 1986 Coronado that perfectly matched all criteria. We paid up for it but I have no regrets. Over the last 5 years we have enjoyed many happy hours in the Coronado, The 454 has a great voice, the build quality is “bomb proof”, and its roomy enough accommodate many family and friends. These boats have an incredibly solid feel, they are very seaworthy, and just plain fun on the water. The Coronado (Valhalla II) has been a great addition to my fleet. It’s also part of my desire to preserve the classic boating experience and never ever own a pontoon.