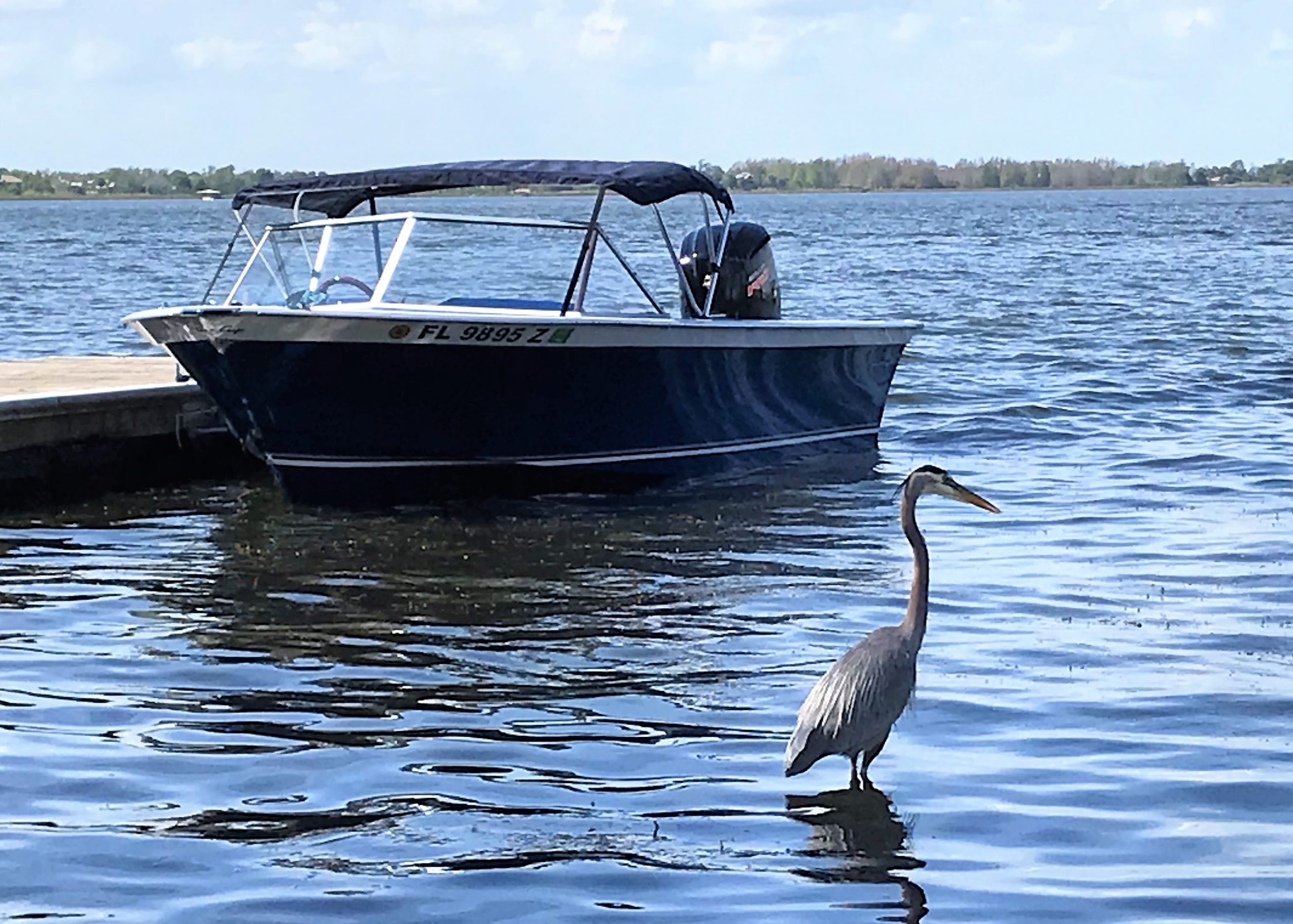 by Bobby Knight member of the Sunnyland chapter

When I was 12 years old, my father purchased this 1964 Chris-Craft 17’ 6” Sunlounger in the outboard version and snapped on the chrome Mercury 800 from his previous Borum wooden boat.
Dad, family, and friends loved Florida boating to places such as the Suwannee River, Santa Fe River, Dunnellon, Withlacoochee, Rainbow River, Welaka, Silver Glenn Springs, Homosassa Springs, Kissimmee, Ocklawaha to Silver Springs, and Key Largo.

Around 1980 dad bought another boat, something faster and smoother. He tried to sell the Chris-Craft, but nobody wanted an old boat back then. So, I took it over and the first thing was getting rid of the original fake wood interior and I installed real mahogany plywood with mahogany dashboards. An Emron paint job followed (sort of the original blue with a micro metal flake) and she was lookin’ good again. But in the mid 1980’s she needed a new transom.

Around 1990 I noticed a crack in the hull from the forklift at the marina. Upon closer inspection, water had gotten into the double bottom filled with foam and a balsa core that turned to mush in the back of the boat. Long story short, I took this one on myself and cut out the back 2 feet under the dry well and replaced it. Good to go for another 16+ years.

The 5th Mercury engine finally quit, but the Chris-Craft was so old I couldn’t justify a new engine on it. Curtis Johnson, a legendary Jacksonville Master Merc Tech built an engine out of spare parts for $2,500 and she flew with a guesstimated 135hp on the back.

But after about 8 years, that engine developed problems and the whole rig needed so much work that it was moth-balled in dad’s boat house for another 10 years. By now, 2016, both my parents are pushing 90 and I needed something to do there besides discussing age related things. Then it hit me… the Chris-Craft, patiently hanging, waiting for another day on the water. Dad and I got her washed up and, although nothing worked anymore, she still looked good.

Lambs Yacht Center was across the river. I grew up with the current owners who remembered the blue boat and had some stories about her. Lamb’s assigned Marcis Borum to the restoration and now
we’re full circle because Marcis’ grandfather created Borum Boats in Jacksonville who built beautiful molded wood hull boats in the 50’s and 60’s, of which my father previously owned two. So Marcis and I hit it off on day one.

Six months later, the Chris-Craft had a new epoxy transom, Emron paint, new Merc 115 Pro XS, bow fuel tank, and even a USB charger for gadgets. The seats were still good, I made new mahogany dashboards and tuned-up the mahogany side-panels with 6 coats of spar. Chrome hardware and other boat jewelry was the final touch, and it all came together better than envisioned. Marcis’ and my highlight was seeing my 91-year old father take her for a spin once again.

The boat finished, I was encouraged to join ACBS Sunnyland and take her to the boat show in Tavares on Lake Dora, which we did. It’s now one of our favorite places and events.