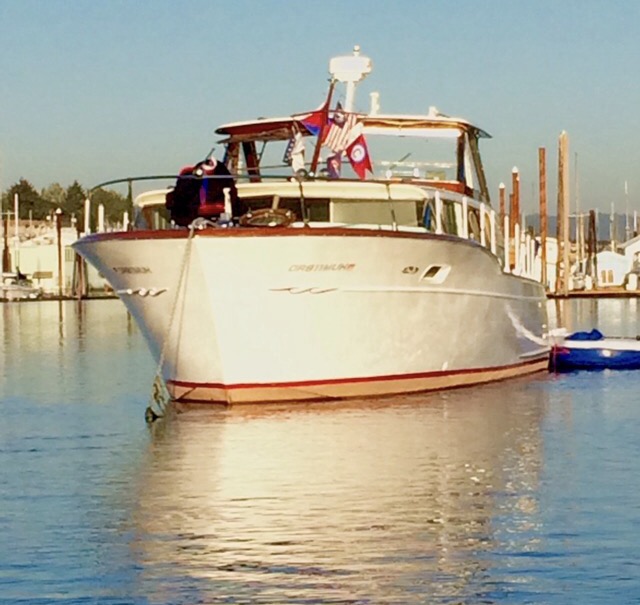 Louie is a 1960 Chris-Craft Constellation Hull# CXA-36-139h with hardtop option and still powered by two original Model 283HR025 Chris-Craft Marine engines serial numbers 811440 and 811441. Louie is named to honor my grandfather, James Louis “Louie” Finks Sr. whom I was very close. My grandfather lived to be 100 years old, was a great guy and enthusiast of everything “with an engine” and that included my Chris-Craft.

As a Constellation, the Louie represented the flagship model line for Chris-Craft and was the first design to succeed “bullnose” hull designs of the 1950s with a new sleek “clipper bow” and pronounced sheer fitting for the “Jet Age” and entry into the Kennedy era. According to my friend and renowned vintage boat restorer and Chris-Craft family member Mike Green, the design is significant as it was the last collaboration by famed designer and Chris-Craft Senior Vice-President William “Mac” MacKerer and Chairman Harsen Smith whose family founded Chris-Craft in 1874. Also, according to Mike Green, the color palette was unique to the 1960 model year and fitting identification to Chris-Craft’s flagship model line. Louie wears the correct livery as when new.

Louie was delivered to the Staff Jennings dealership in Portland, Oregon on May 6, 1960 and has remained in the Portland, Oregon area. The original owner was Robert Herzog, a local yachtsman and co-founder of the first Volvo dealer in Oregon. Herzog and his wife Ann were members of the Portland Yacht Club and called the club its home port as recalled by a longtime club member Barry Post. Herzog kept the vessel for a few years until trading it for a 42-foot Chris-Craft Conqueror around 1963.

Ray and Karen Nairn owned the Chris-Craft then named “Knot-Y-Buoy” for several years in the late 1980s until about 1997 when it was purchased by real estate executive David Moore and wife Sheila. Moore stated that he owned the vessel until the summer of 2000 and sold it due to his growing young family. During his ownership, the Chris-Craft became nameless. Moore told me he deeply regretted selling the Chris-Craft and still misses it. He sold the vessel to Austin Stephens and wife Holly Files, a respected chief executive in the high-tech business world. The Stephens-Files’ owned the Chris-Craft from 2000 until late 2009 when it carried the name plate “Miz Holly”. During this time, the Chris-Craft was kept in a boathouse on the Multnomah Channel in Scappoose, Oregon. In 2009 the vessel was sold to Rufus Alwyn a local general contractor who kept the boat for several months, before listing it for sale in mid-2010.

In late spring 2010, my good friend, Chuck Kellogg took me to see the boat which he considered in fine shape and “pretty darned original”. When we looked at the Chris- Craft, Chuck proclaimed, “good God, will you look at her lines, Chris-Craft knew how to build a beautiful boat!” Broker and Chris-Craft expert Bobby Krause of Vercoe Yacht Sales sold me the boat in a deal orchestrated by Kellogg.

My family and I have enjoyed this beautiful Chris-Craft Constellation and have taken it to several regional cruises, Opening Day Parades and boat shows including five Maritime Heritage Festivals, several Lake Oswego Heritage Council Classic Boat Shows and Portland Yacht Club Classic Car & Boat Shows. During our stewardship, we continue research to guide the preservation or restoration of paint, engines, cabin soles, mechanicals, counters, upholstery and brightwork. Also, onboard, is an original decoy carved by Chris-Craft founder Chris Smith dating from the 19th century.

In 2010, Louie returned to the Portland Yacht Club fleet under our stewardship. The boat is moored inside an upgraded 1963 Hargrave boathouse. Our plans in the future are to continue preserving the Louie via ongoing conservation work and to enjoy the many friendships within the antique and classic boat community.